Analysis: Biden's defense of democracy, strong abroad, is struggling on his home turf 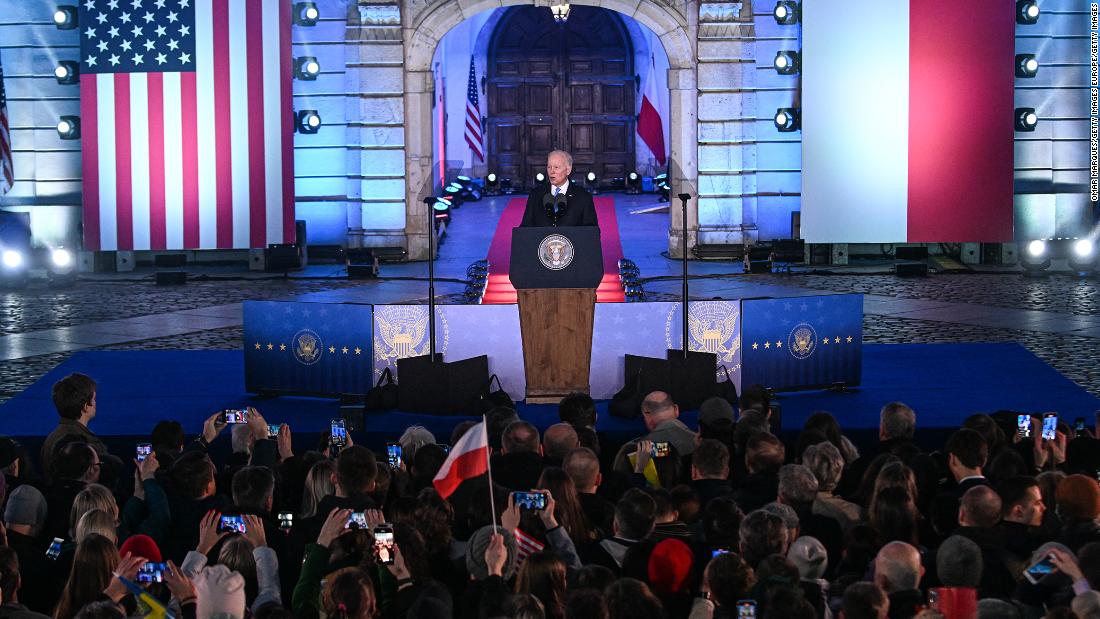 The President’s signal achievement has been uniting Western democracies in defense of Ukraine against Russian leader Vladimir Putin’s authoritarian aggression. With coordinated flows of military equipment, economic aid and sanctions, Biden and NATO partners have helped prevent Russia from overrunning its smaller, weaker neighbor.
Yet Biden himself stands to get politically overrun within months by Republican opponents at best indifferent and at worst hostile to preserving America’s own democracy. Facing an electorate upset by inflation, crime and the lingering pandemic, the White House has watched the President’s approval rating fall to levels that almost guarantee the Democratic Party will lose control of one or both houses of Congress in the midterm elections.
In part, Biden’s performance on Ukraine reflects his ability to unilaterally direct foreign policy as commander in chief. But preventing fractures within the coalition backing Ukraine has required steadiness and diplomatic skill that bucked years of Russian attempts to sow divisions within the United States and its European partners alike.

Putin “wanted less NATO … but he is getting more NATO,” Jens Stoltenberg, secretary general of the North Atlantic Treaty Organization, said at the White House earlier this month.

“Among Europeans, there’s a high level of trust that he’s made the right moves,” observes Daniel Ziblatt, a Harvard professor who’s a co-author of the book “How Democracies Die.”

Among Americans, trust has proved exceptionally hard to find.

Polarization makes rigid Republican opposition a given. But a thoroughly sour public mood — whether the result of Biden’s actions or not — has dispirited fellow Democrats and sent independents toward the GOP less than five months before Election Day.

That places the 246-year-old American experiment at risk. Not only do vast swaths of the GOP cling to former President Donald Trump’s lies about his 2020 loss to Biden, Republicans in multiple states have been positioning themselves to thwart the popular will in future elections.

“Our republic is on a river heading toward a cliff,” says Ian Bassin, director of the advocacy organization Protect Democracy. “We’re about to go over it.”

Though Bassin worked as a lawyer in President Barack Obama’s White House, his assessment is not partisan. It matches the warning that conservative former Judge J. Michael Luttig gave the nation last week in testimony to the House committee investigating the Capitol insurrection of January 6, 2021.

“Our democracy today is on a knife’s edge,” said Luttig, once on President George W. Bush’s short list for a Supreme Court appointment.

Republican leaders in Congress have cast the January 6 committee’s investigation as a partisan smear. They are lying just as surely as Trump is with his claims to have defeated Biden.
In three public hearings so far this month, the January 6 committee has avoided even the slightest partisan taint. Its most compelling statements have come from conservative Republican Rep. Liz Cheney of Wyoming. Its critical witnesses have been Republicans, including not just members of Trump’s administration but also members of his family.

They’ve painted a clear and consistent portrait: of a President who relentlessly sought to erase the verdict of American voters even though he knew it was both groundless and illegal. The consequences were deadly.

Biden, like his party and the modest faction of pro-democracy Republicans, can only hope the hearings slow a return to power by the leaders who spawned and have tolerated that threat to the American system. There’s little sign that previous attempts have had much effect.

Entering the presidency, Biden hoped that taming the pandemic and delivering concrete economic benefits for struggling families could repel anti-democratic threats by broadening his coalition. But dogged vaccine resistance underscored how even life-or-death stakes may not overcome the tribal identification of Republicans who feel besieged by 21st-century cultural change.
Bare congressional majorities have complicated Biden’s ability to deliver economic benefits. For the same reason, attempts to bolster democracy through federal legislation safeguarding voting procedures and election administration have gone nowhere.

Desperate for progress, Bassin wants Biden to consider new approaches, some of them highly unconventional for any president. A legislative deal with congressional Republicans restricting some instruments of executive authority, for example, could help “fireproof” the White House against a future would-be tyrant.

That Republicans have become “the Achilles’ heel” of American democracy, as Ziblatt puts it, has historical precedent. The preservation of democratic systems, he says, has typically depended on whether center-right parties representing traditional powers within a society adapt to competing in elections rather than thwarting them.

This year, Republicans command such high political ground that they may not need to challenge election results. But Republican ascendance this fall, like Biden’s 2020 victory, won’t resolve the fight to preserve democratic institutions.