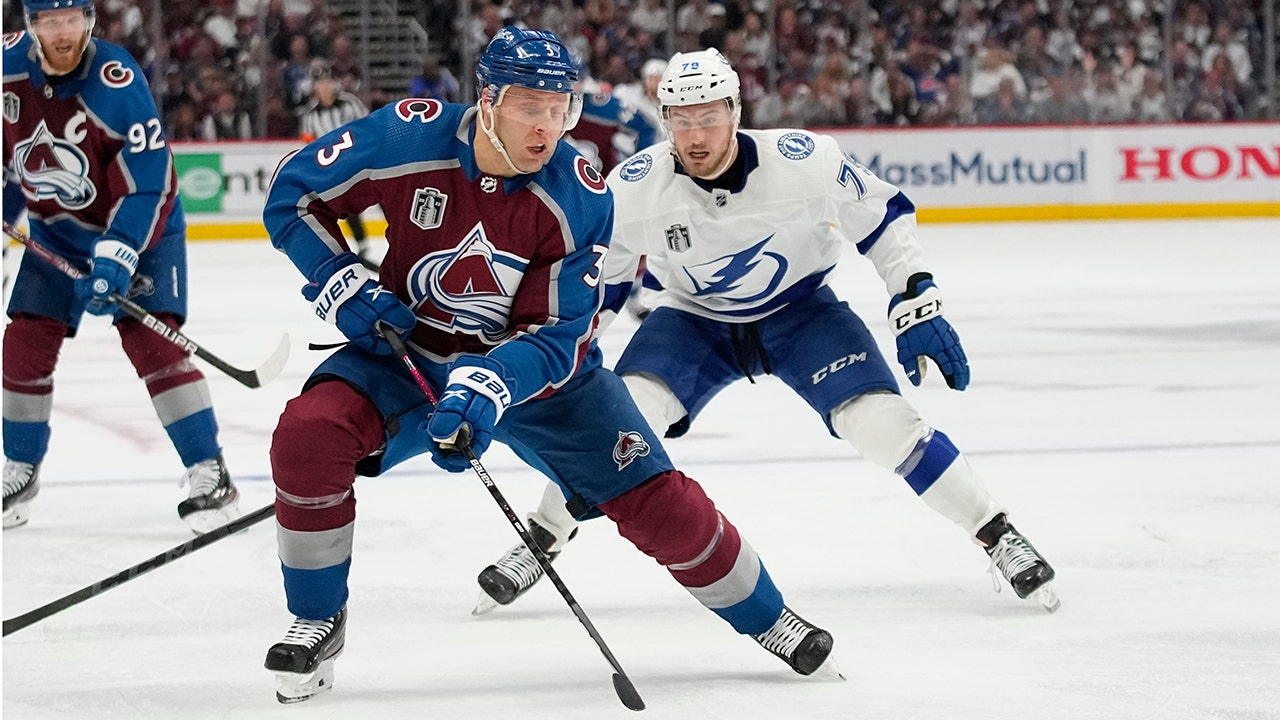 Looking like by far the better team against the defending champions, the Colorado Avalanche overwhelmed the Tampa Bay Lightning 7-0 in Game 2 of the Stanley Cup Final on Saturday night to take a 2-0 lead in the best-of-seven series.

Valeri Nichushkin scored his seventh and eighth goals of the playoffs and continued to be the best player on the ice in the final, Game 1 overtime hero Andre Burakovsky beat Andrei Vasilevskiy again and even defensive defenseman Josh Manson and 35-year-old grinder Darren Helm got in on the fun with a goal apiece. Playoff MVP front-runner Cale Makar scored twice in the third period, inciting chants of “We want the Cup!” from a fired up crowd.

“They’re playing at an elite level right now — give them credit. We are not,” Lightning coach Jon Cooper said. “They’re two good teams. They’re just playing a much higher level right now than we are.”

Rarely have the Lightning been completely outclassed during this run of postseason success, but they also hadn’t faced an opponent like the Avalanche, who forced them into one uncharacteristic mistake after another. Colorado was dominant in every facet of the game to move two victories away from its first title since 2001 and the first by this core led by Nathan MacKinnon.

The dominant performance started by pouncing on an early mistake by typically reliable Lightning defenseman Erik Cernak when he bobbled the puck at the blue line on one of the game’s first shifts. It was all Avalanche after that.

AVALANCHE READY TO END LIGHTNING’S STANLEY CUP RUN: ‘YOU WANT TO BEAT THE BEST TO BE THE BEST’

Their aggressive forecheck led them to draw a penalty on veteran Ryan McDonagh, score on the ensuing power play when Burakovsky fed Nichushkin for his first of the night. It wasn’t his last, and Colorado poured it on with six of the game’s first seven shots and complete territorial domination with much of the game played in the Tampa Bay end.

“We came out with a purpose,” said forward Andew Cogliano, who returned after missing Game 1 with a right finger injury. “We got to our game, we skated from the drop of the puck and we just didn’t let up. ”

With Vasilevskiy — whose play was the key to the Lightning’s incredible ability to bounce back after a loss in the playoffs — looking shaky and even dropping his head after letting Makar beat him clean on one of many 2-on-1 rushes, the Avalanche made the most of all their offensive zone time. The highest-scoring team this postseason put on a clinic against the team that has played more hockey than anyone else over the past two years.

That may finally be taking its toll, and it’s exacerbated by the blazing speed with which the Avalanche play. They again not only outskated the Lightning but used quick feet to force errors that turned into goals.

“Am I shocked that we lost 7-zip?” Lightning captain Steven Stamkos said. “I mean, I don’t think we saw that coming.”

Tampa Bay fell to 18-2 after a loss since the start of the first round in 2020. The streak of 18 in a row ended in the Eastern Conference final against the New York Rangers when the Lightning fell behind 2-0 before roaring back, though it’s hard to see Colorado falling into the same trap.

Even if players brush off the concept of momentum from game to game during a playoff series, their romp over the champs combined with a 7-0 road record should fill the Avalanche with confidence. But they might again need to dip into their pool of depth because of injuries.

After getting Andrew Cogliano back from missing the season opener with a right finger injury, the Avalanche lost Burakovsky again in the second period. Burakovsky blocked a shot in the first game in the West final and has been playing through pain since. Coach Jared Bednar said he would be re-evaluated ahead of Game 2.

Colorado is inflicting plenty of pain on Tampa Bay, which resorted to some rough stuff after falling behind. Of course, even MacKinnon was throwing hits in the third period despite the game being well in hand.

Darcy Kuemper was barely tested in net for Colorado, picking up the shutout with 17 saves.

“He was just rock solid,” Manson said. “He was exactly what we needed to be.”