Biden has few options left to quickly bring down gas prices. Now he's making a big bet by bashing Big Oil and turning to a brutal leader for help. 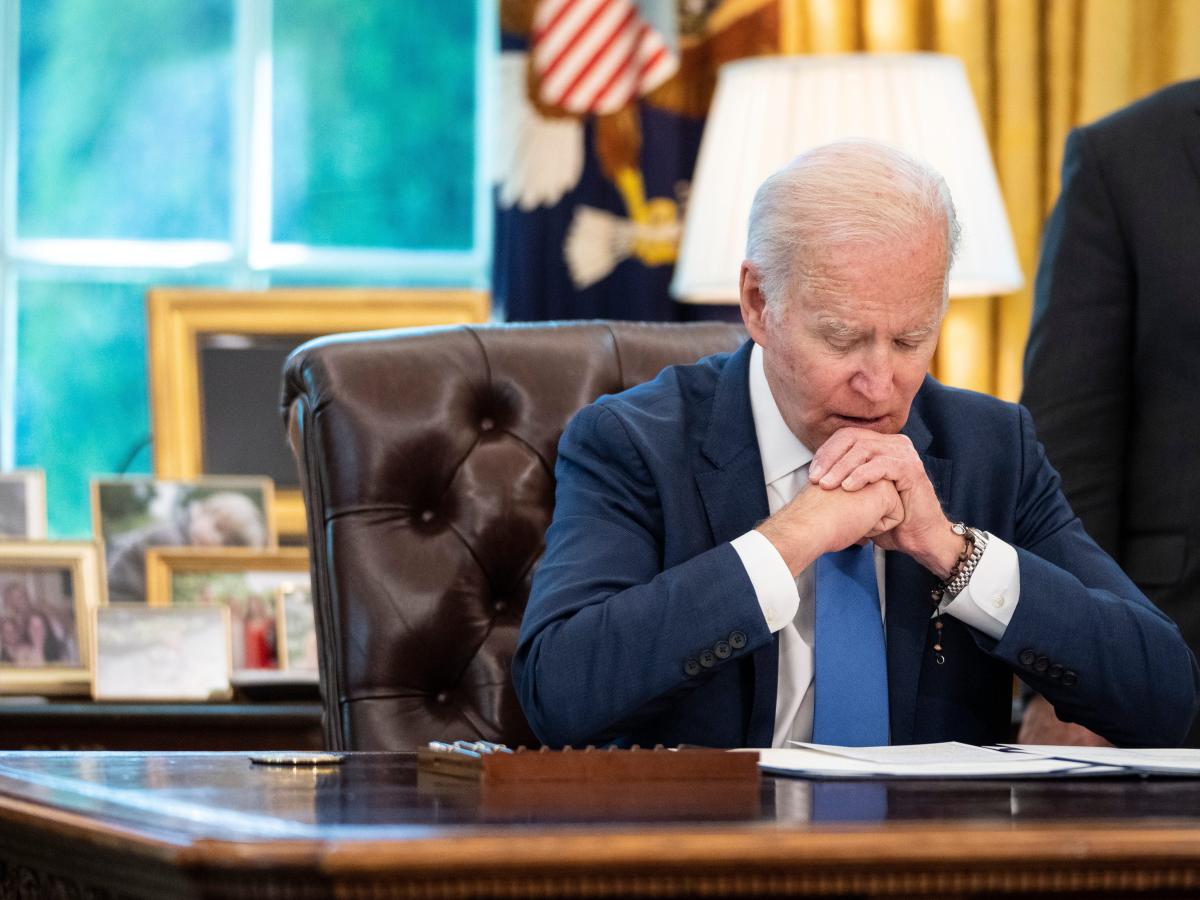 President Joe Biden is staring down a political wipeout within a few months.

A spike in oil and gas prices is threatening to deal Democrats a decisive defeat in the November midterms. The national average for a gallon of regular gasoline rose past $5 last weekend for the first time. It’s a 10 percent jump from a month ago, reflecting huge consumer demand outstripping the available supply of oil paired with severe aftershocks in energy markets from the war in Ukraine.

The grim political outlook for the White House was compounded with an inflation report that came in worse than many economists expected. It showed prices for groceries, airfare, and rent increasing at their fastest pace in four decades. Biden has since doubled down on his pledge to combat rising prices and make it the top domestic priority.

But the surge in gasoline prices underpins the current inflationary spiral. It’s burdening businesses with bigger bills for electricity, air travel, and shipping, raising prices across the board for Americans. There seems to be few options left for the White House to reverse the supply crunch. It already committed to the release of one million barrels per day from the Strategic Petroleum Reserve in May, eased regulations on ethanol fuels, and tried unclogging ports.

“President Biden is using basically the full suite of tools that are available,” Jonathan Elkind, a senior research scholar at the Center on Global Energy Policy at Columbia University, told Insider. “It seems to me the Biden administration has been doing many of the types of things that make sense.”

But those moves failed to provide relief at the pump, and its prompted Biden to make a big bet with gas prices climbing with no end in sight. He’s bashed Exxon and rebuked other large oil companies for running up huge profits in a letter, signaling a more aggressive approach against a sector that he’s urging to quickly ramp up production.

He’s poised to meet Saudi Crown Prince Mohammad Bin Salman in July, despite vowing to turn Saudi Arabia into an international pariah over the killing of Jamal Khashoggi, a prominent critic of the Saudi royal family and a journalist who resided in the US.

It remains to be seen if going after one bogeyman in the form of Big Oil and cozying up to another in the form of a questionable ally will be enough to tamper gas prices and keep Democrats from losing one or both chambers of Congress this fall.

The possible image of Biden shaking hands with a Saudi leader who is the reported mastermind of Khashoggi’s assassination is enough to prompt unease and criticism among his Democratic allies.

Sen. Tim Kaine of Virginia told Insider he thought the meeting was a “bad idea,” adding it was his “intuition” that the president’s trip was at least partly meant to prod Riyadh into stepping up oil production.

“I see very little evidence that the Saudis are going to lower gas prices,” Sen. Ron Wyden of Oregon said on Wednesday. “I see a lot of evidence of their horrendous human rights violations.”

Riyadh has very limited room to ramp up oil production — known as “spare capacity” — and analysts say even if Saudi pumped more crude, it could still fail to dent the spike in gas prices. “It’s not like throwing a switch,” Elkind said. “It’s not like that would instantaneously affect things.”

Some are pushing the Biden administration to think outside the box. Skanda Amarnath, executive director of left-leaning think tank Employ America, argues the federal government should briefly guarantee demand for oil producers among other administrative maneuvers and prioritize clean-energy initiatives in the long run.

“It feels icky for Democrats to talk about doing things that are kind of industry-friendly,” Amarnath told Insider. “But there are actually things if you do them right,  you will prevent oil prices from crashing and having this boom-bust cycle again.”

“There’s nothing that the president controls less than gas prices”

Experts say the White House is all but at the mercy of roiling global energy markets severely disrupted from the war in Ukraine.  “There’s nothing that the president controls less than gas prices and nothing that people want him to control more than gas prices,” Jason Furman, formerly a top economist in the Obama administration, told Insider.

Congressional Democrats are struggling to hang onto their thin majorities. Republicans are pummeling Democrats as tax-and-spend liberals who worsened inflation with the stimulus law last year and choked off domestic energy production.

Some Democrats are blaming large oil companies for raking in huge profits at the expense of Americans who are getting squeezed at the gas pump. Wyden is set to unveil a plan that would slap oil companies with a 21% surtax on profits deemed excessive, along with taxing firms buying back their shares.

“You have Big Oil doing so immensely well under the federal tax code at the expense of the consumer,” Wyden told Insider, adding he believes his measure will “connect” with people. Separate polls from the left-leaning Groundwork Collaborative and The Washington Post show a majority of voters pin the blame on oil companies trying to profit off the surge in gas prices.

“Profits are four times what they were prior to the war in Ukraine,” Lindsay Owens, executive director of the Groundwork Collaborative who conducted extensive research on the subject, said in an interview. “The oil company executives are bringing in huge profits and bragging about it to shareholders in earnings calls.”

Sens. Bernie Sanders of Vermont and Sheldon Whitehouse of Rhode Island also released their own windfall tax proposals. Those are modeled after programs recently established in Italy and the United Kingdom providing checks to the poorest families.

The Biden administration has kept the door open to a windfall profits tax as well. But some liberal and conservative economists are criticizing windfall taxes as potentially inflationary and damaging to efforts at increasing crude production.

“The Wyden plan would partly be passed onto consumers in the form of higher prices and would discourage production,” Furman said. “It is not the right approach.”

“I think the fact that the Biden administration is floating a windfall profits tax or saying they’re gonna consider it shows that they’re in blame-shifting mode, not really constructive mode,” Donald Schneider, deputy head of US Policy at Piper Sandler and a former House Republican aide, told Insider.