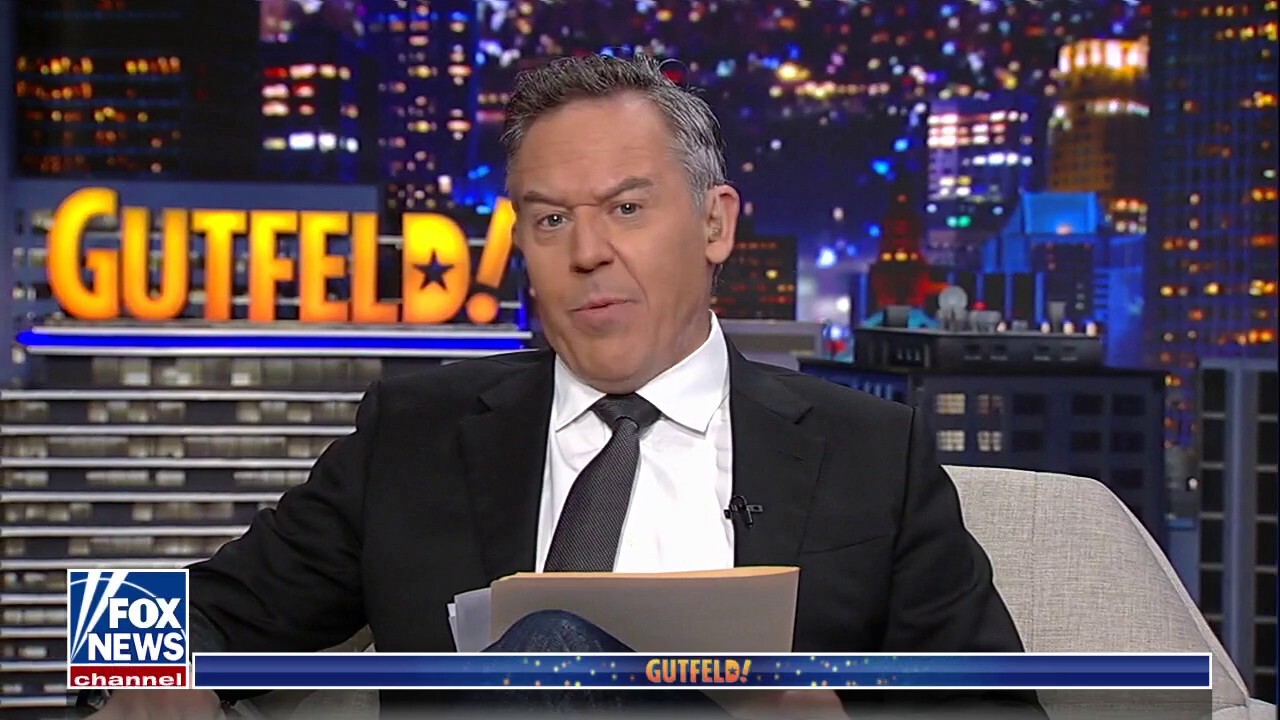 Now you know why you like this show. Besides my irrepressible sex appeal and cogent analysis. It’s the honesty. Like a clogged men’s room toilet at the Times Square Burger King. We are brimming with it.

For example, just now I said, happy Wednesday and true, it’s Wednesday. Fox and Friends would have said something like Thursday. Stupid liars. But that’s not just an isolated instance of honesty. It permeates this show like powdered sugar and Brian Stelter’s chest hair. Keep telling him to shave.

For example, this was a slow news day. So slow I was like the only one in this building. Wait until Jesse sees what I did to his suits. I had no idea polyester was that flammable.

Now, I could have done a mono on inflation or Joe Biden, but really not again. It’s so boring. Thankfully, a producer offered this headline, quote, “Transgender ex neo-Nazi Robber to receive fast tracked gender confirmation surgeries.” Wow. I’m so glad he’s an ex neo-Nazi.

But talk about a perfect storm of Gutfeldian content: trans, Nazi, gender surgery, prison. It sounds like a Hogan’s Heroes after party at Bob Crane’s condo. That dude was crazy. Read up on him, seriously.

But this story has everything. And when I heard it, I practically fainted into the arms of Steve Doocy, who still uses Aqua Velva. Good for him.

But it’s true. The US Bureau of Prisons, or BOP, is speeding up a transgender ex neo-Nazi bank robber’s gender confirmation surgeries, after the thug filed a lawsuit claiming it denied previous requests.

Now they say that all claims in this case might be resolved without the need for further litigation. Wow. Lawyers must hate that sentence.

Meanwhile, somewhere there’s an Army vet waiting for a kidney. Further proof that where there’s a will and a lawyer working on your behalf, there is a way, especially in jail, because you have the world’s most precious commodity on your hand. I mean side. And it’s time.

So no surprise the surgery is on track. And guess who’s footing the bill? You. I mean, who else but taxpayers. And if that’s true, shouldn’t we see what the finished products are going to look like? If I’m paying for the pizza, I get to pick the toppings, dammit. Let’s start with 38 DD’s and a nectarine shaped ass. It’s a terrible thing that anybody would say something like that.

Now, back in the nineties, the 1990s Kat, the inmate, Donna Langan was born Peter Kevin Langan, who was convicted to life in prison, plus 35 years for robbing banks, using firearms and a destructive device, assaulting officers and other firearms charges. I’m not even sure that’s illegal anymore.

At the time, Langan was part of a neo-Nazi group called the Aryan Republic Army. This guy was such bad news. I’m surprised Kat didn’t let him sleep on her couch. Langan spent two decades in a male prison, lucky bastard, before being transferred to a female one. Of course, I’m sure the number of inmates like Langan isn’t big, yet doesn’t everything start out small until it isn’t anymore? Well, except for me, I never grow.

But everything else expands through corruption. It’s based on the Gutfeld theory of system gaming or GSOG. That’s when with any new phenomenon there are always those who hack the system, and like a young Forest Gump running for the bus, it takes us forever to catch up as we get defrauded or end up paying for absurd things like gender surgery for thugs.

Criminals went from making license plates for us, to us making vaginas for them. You’re welcome. Take therapy pets for air travel. Perfect for vets with PTSD. But what happened next? People went online and filled out bogus paperwork. Suddenly there are so many dogs on planes, I added heartworm medication to my Xanax. Watching people board the plane now looks like an episode of Wild Kingdom. Some dame with a peacock. Bearded weirdos with therapy snakes. Some guy fondling a chicken in an exit row. Who could that be?

Fact is human instinct has us exploit every good intention. Hell, stuff like this happens all the time.

STAFFER 1: But he has a beard.

STAFFER 2: They grow up so fast.

STAFFER 1: Fine. One, kids combo. Wait a minute. What movie did you guys say you were seeing again?

STAFFER 1: Yeah, that movie is rated X. He is way too young for that.

STAFFER 3: Thanks, Daddy. See you soon.

STAFFER 2: Enjoy the sex scene, son. I love you.

Now you saw this with COVID loans. How many billions were defrauded? Because how dare we question people pretending they needed the money. But with anything in life, the road paved with good intentions always ends up in a ditch of depravity.

Hate crime laws gave us hate crime hoaxes. And how soon before red flag laws lead to neighbors narcing on neighbors out of spite? Now it’s back to burying my bodies under the floorboards. Like the old days.

It’s about gaming the system and like a defective sex doll, even the language is impenetrable.

If your belief is counter to reality, simply use language to create a new reality. According to the New York Post, Langan knew, quote, by the time she was four, that she had been misidentified as a boy. And his or her entire life has been shaped by the agonizing tension between the new immutability of her gender identity and the often life or death danger of publicly living her truth.

That is what we call hogwash. And I still wouldn’t want to wash my hog with it. It’s a Harley. Be safe. That’s my nickname. But we are living in a time where truth is supplanted by belief as a lifestyle choice.

Even if your belief is wrong, it’s still your choice. You can be a flat earther, a 911 truther, a pregnant man. These are all just idiotic beliefs redefined as choices, and we end up footing the bill while criminals laugh all the way to the gender-neutral bank.

Greg Gutfeld currently serves as host of FOX News Channel’s (FNC) “Gutfeld!” (weekdays 11PM/ET) and co-host of “The Five” (weekdays 5PM/ET). He joined the network in 2007 as a contributor. He is the author of several books. His latest is “The Plus: Self-Help for People Who Hate Self-Help.” Click here for more information on Greg Gutfeld.