Jan 6: Eager to troll Trump, ‘Morning Joe’ compares hearing viewership across all networks to ‘The Apprentice’ 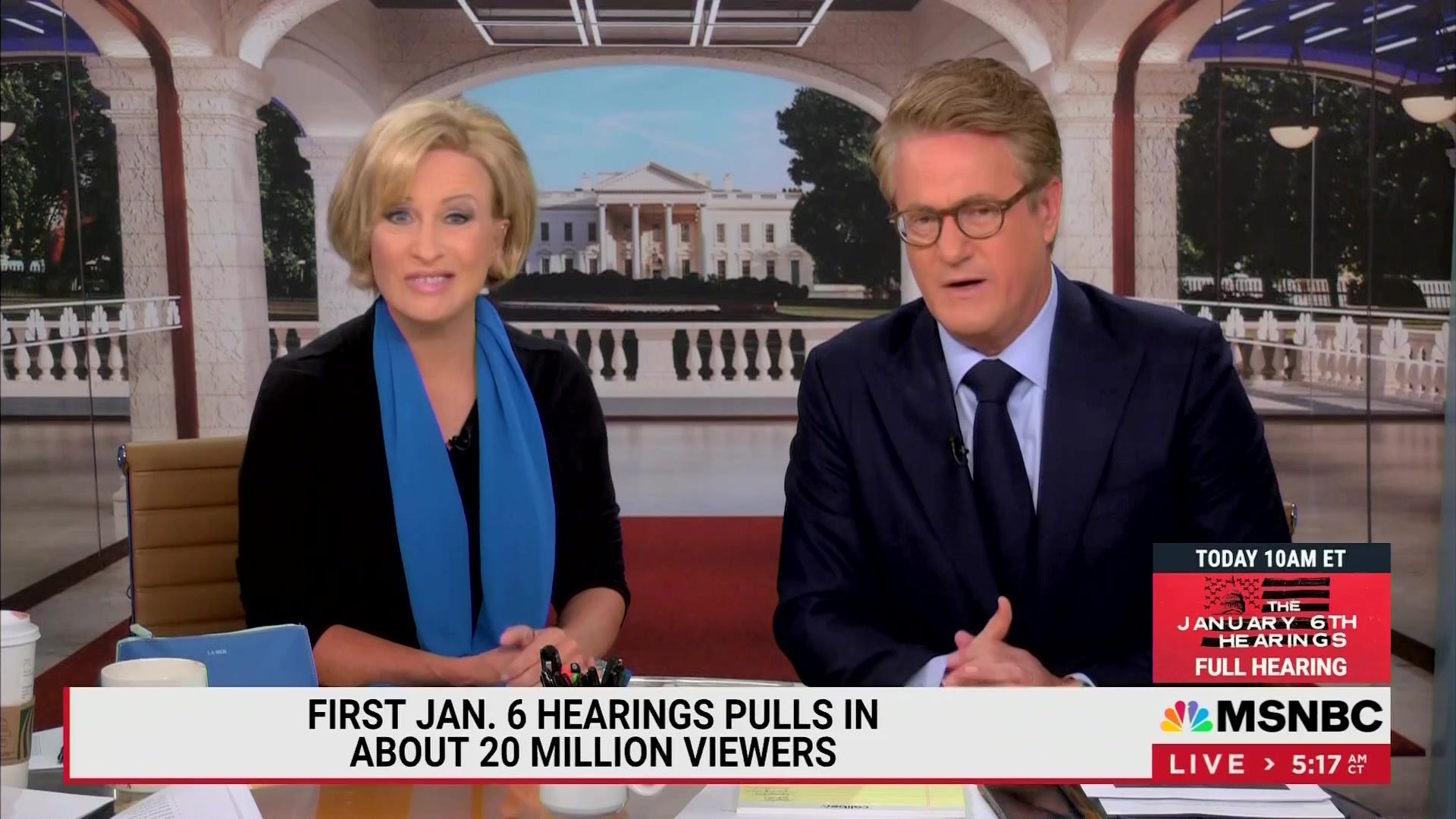 The co-hosts of MSNBC’s “Morning Joe” were so eager to troll the former president and their ex-bestie Donald Trump that they rushed to bolster the viewership of the first primetime January 6 hearing by making a far-fetched comparison to mock the audience of his hit NBC programs.

Thursday marked the first of several hearings being conducted by the House Jan. 6 Select Committee to lay out what its investigation discovered looking into the events that led up to the pro-Trump riot that erupted on Capitol Hill.

The hearing was broadcasted live on many of the biggest networks including ABC, CBS, NBC, MSNBC and CNN. Early numbers indicate that roughly 20 million viewers collectively tuned in for the political programming produced in consultation with former ABC News president James Goldston.

On Monday, Joe Scarborough and Mika Brzezinski were overly giddy to tout those numbers at the expense of Trump, who is known for his fixation on the size of TV audiences.

“Mika, did you know that about 20 million people across America watched Thursday’s primetime hearing?” Scarborough playfully asked. “And as the Times points out, those 20 million viewers is in the ballpark with big television events like Sunday Night Football.”

“But I want you to compare those 20 million viewers with the biggest ratings Donald Trump garnered for his reality show,” Scarborough said.

“Morning Joe” then pointed to numbers showing 20 million viewers topped the “7.6 million” Trump received when he hosted the final season of NBC’s “Celebrity Apprentice” and the “4.6 million” he earned for the final season of “The Apprentice,” all while displaying an image of Rep. Liz Cheney, R-Wyo., laughing as she stands above the former president.

“Wow, so these hearings trumped that,” Brzezinski said.

“I’m not very good at math… but if you look at the last season of ‘The Apprentice,’ Trump got 4.6 million and Liz Cheney got 20 million… and then ‘Celebrity Apprentice’ that season got 7.6 million ‘cause you know, after ’The Apprentice,’ you know, only 4.6 million for a primetime show that he said was the greatest ever, they had to start getting celebrities like, like Gary Busey and other people on to get people watching, right?” Scarborough said while chuckling. “Because Trump was 4.6 in primetime on a broadcast…”

“Really small, but anyway, so look at these numbers again,” Scarborough said before re-airing the stats on the screen. “It’s pretty significant. So, like, you know, if Trump said that ‘The Apprentice’ was like one of the most popular shows of all time, that’s great.”

The MSNBC program also went on to cite the 11.76 million viewers who watched the final game of the 2021 World Series, the 11.78 million who watched the NBA Finals as well as the single-digit audiences that tuned in to “American Idol” and “Survivor,” all to argue that there is a huge public interest in the Jan. 6 hearings.

No one on the “Morning Joe” panel acknowledged that holding up the hearing’s viewership, which aired across several networks, to the “Apprentice” programs that only aired on a single network is far beyond comparing apples and oranges.

The last major multi-network event that had roughly as equal exposure as the Jan. 6 hearing was President Biden’s first official State of the Union address in March, which earned 38 million viewers, trouncing the Democrat-led committee’s primetime debut. President Trump’s final SOTU address in 2020 also bested the hearing, reaching over 37 million viewers, something “Morning Joe” would rather avoid acknowledging.

Joseph A. Wulfsohn is a media reporter for Fox News Digital. Story tips can be sent to joseph.wulfsohn@fox.com and on Twitter: @JosephWulfsohn.

One thought on “Jan 6: Eager to troll Trump, ‘Morning Joe’ compares hearing viewership across all networks to ‘The Apprentice’”

A lawyer for Pence told him the day before January 6 that not certifying the election would lead to a loss in court: report