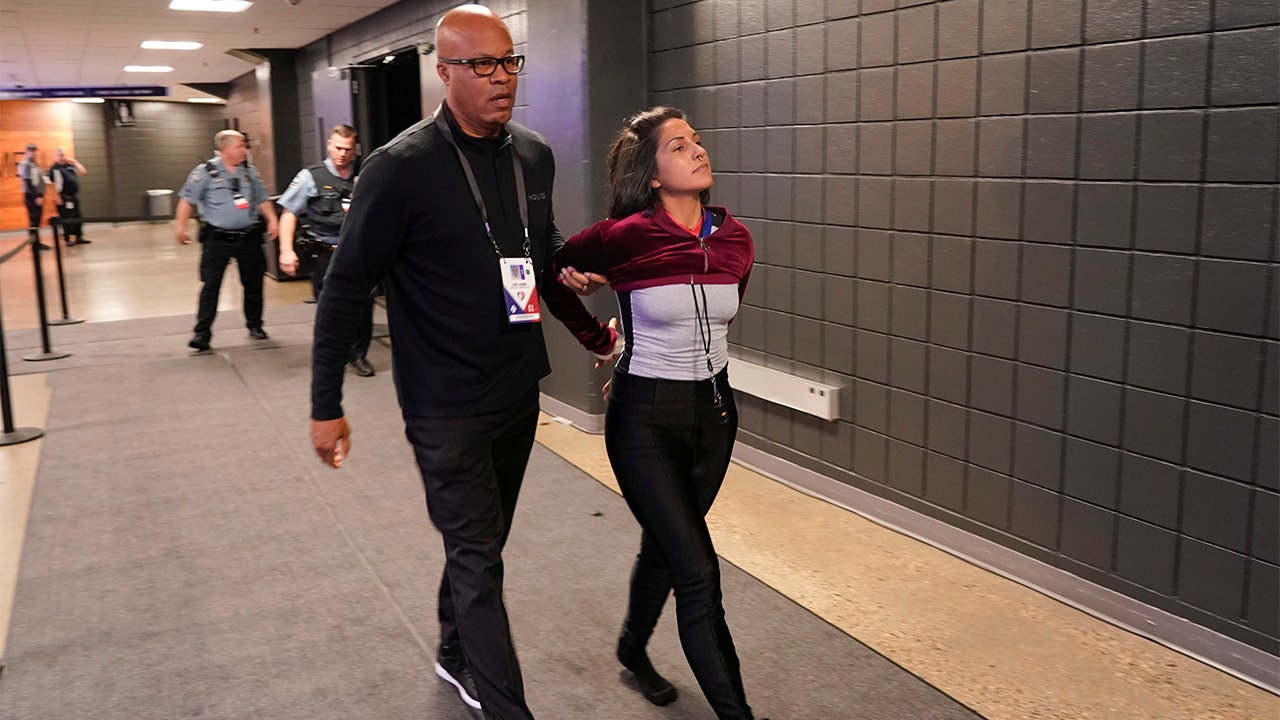 An animal rights activist wearing a makeshift referee jersey was tackled Saturday after storming the court during a playoff game between the Memphis Grizzlies and the Minnesota Timberwolves.

Video of the incident shows the activist seated behind the Timberwolves’ bench before she abruptly runs onto the court with just under 11 minutes left in the third quarter. The woman was quickly tackled by security during the middle of a play. After the whistle blew, she was dragged off the court at Minnesota’s Target Center.

The protester was identified as Sasha Zemmel of St. Louis, Missouri, according to animal rights group Direct Action Everywhere, which claimed responsibility for two previous fan protests at Timberwolves games in recent weeks.

An animal cruelty activist is taken away in handcuffs after she attempted to protest during Game 4 of the Minnesota Timberwolves and Memphis Grizzlies first-round playoff series Saturday, April 23, 2022, in Minneapolis.
(AP Photo/Craig Lassig)

The organization claims the protests were an attempt to have Timberwolves owner Glen Taylor “step down and return factory farm bailout money.”

Zemmel’s jersey had the number 5.3 displayed on the back “in honor of the 5.3 million chickens killed” at Rembrandt Enterprises, an Ohio factory egg farm owned by Taylor, the organization claimed in a press release Saturday.

“She attempted to whistle to stop play as she approached Taylor at his courtside seat to issue a ‘technical foul and ejection,’ along with a ‘fine’ against Forbes’ richest billionaire in Minnesota,” the release added.

The incident was the third fan protest at a Timberwolves game in recent weeks.

On April 12, an animal rights protester glued her hands to the court during the Timberwolves’ play-in game against the Los Angeles Clippers. The woman, identified as activist Alicia Santurio, was taken away by security after the incident.

Just a few days later, a protester wearing a “Glen Taylor Roasts Animals Alive” T-shirt, chained herself to the basket during the series opener between the Grizzlies and Timberwolves at FedExForum in Memphis April 16. That protester was identified by Direct Action Everywhere as Zoe Rosenberg.

She also threw flyers on the floor.

As for Zemmel, she was released from police custody Sunday morning, the organization said.

An animal cruelty activist is taken away in handcuffs after she attempted to protest during Game 4 of the Minnesota Timberwolves and Memphis Grizzlies first-round playoff series Saturday, April 23, 2022, in Minneapolis.
(AP Photo/Craig Lassig)

Another protestor seated next to Zemmel was also removed from Saturday’s playoff game, which the Timberwolves won 119-118.

The series is tied 2-2 with the next game scheduled for Tuesday evening.