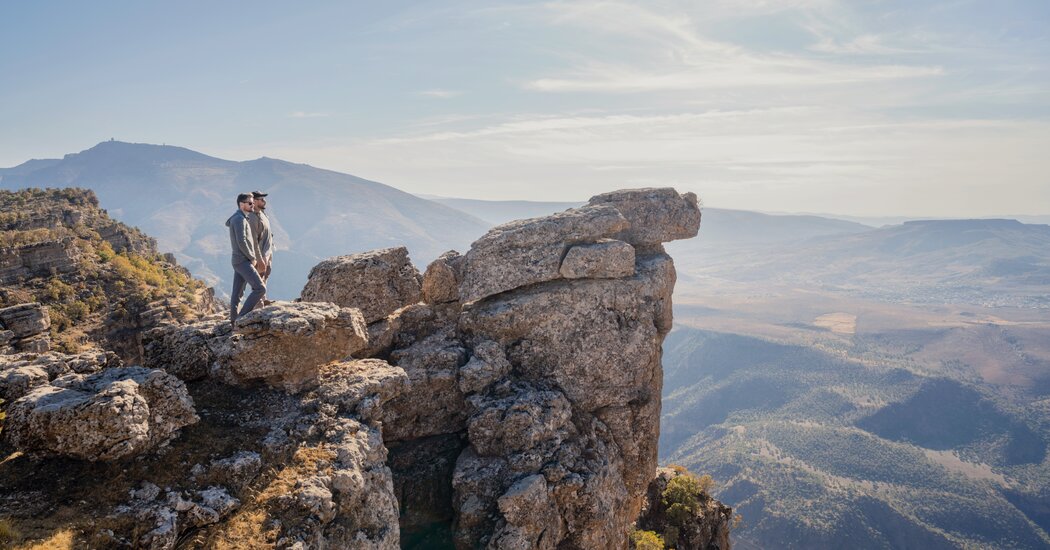 It fell to Mohammad to translate the act of hiking into more familiar activities, and to present as sites of leisure mountains that have long been bound up in Kurdish identity as zones of violence. They have served as refuge for guerrilla fighters and as the site of Hussein’s death camps and firing squads. The Baathist government killed as many as 180,000 Kurds in the Anfal campaign alone, a figure that does not include the crushed revolts of the 1960s, 1970s and early 1980s; those killed in wars with Iran, Kuwait or the United States; or those killed in wars and massacres elsewhere in greater Kurdistan — Syria, Turkey and Iran — where international hiking trails are not remotely possible. According to a shopworn saying of indeterminate age, “The Kurds have no friends but the mountains.” The saying is double-sided. It refers to acts of betrayal Kurdish communities have endured at the hands of supposed allies over the centuries — among them the United States government, which by one count has betrayed the Kurdish causes of nationalism and autonomy eight times — and to a history of hardscrabble survival in the Zagros, Taurus and Qandil ranges.

“We Kurds fled to the mountains, we hid in them, and in some cases pesh merga spent years living in them,” Mohammad said. “They really were our only friends.” We were crossing a field of dry Syrian thistle. Here a person might find the Kurdish alchemilla, the Syrian rhubarb and the Iranian onion sharing a single clearing. Now, Mohammad said, the mountains were for hiking. “Not hiding,” he said, relishing the wordplay. ‘‘Hiking.”

Because the trail to Zorgavan was nearly fixed, Garthwaite had invited two friends to join us for the day. The women were avid hikers. One of them, Meena Ayad Rawandozi, wore a blue windbreaker and a baseball cap over her long, straight hair. Her father was a government bomb-defuser who often hiked into Yazidi towns to neutralize ISIS ordnances. She wasn’t worried about mines; oaken nerves ran in the family. “He tells me, ‘Go to the mountains,’” she said. “He supports me.” Some years ago, Rawandozi joined a hiking club founded by a few university students. They chose a name — No Friends But the Mountains — anyone would recognize, and achieved viral fame on Instagram posting saturated photos of secret hiking spots. Soon, N.F.B.T.M. had thousands of followers. From five members they grew to 30, women and men, with Kurds, Assyrians, Turkmen and Arabs.

As the group expanded, Rawandozi began to think about the value of women’s access to the outdoors. She started climbing with an emergency rescue team to train herself to lead long-distance treks. “We don’t have a hiking group only for women in Kurdistan,” she said. “It’s a new thing for us.”

Recently, Garthwaite led a group of teenage female hikers on a walk in Music Valley, near Shaqlawa. The girls came from Sinjar and Mosul, and they had been living in I.D.P. camps for years. “They are not allowed to hike with men,” Garthwaite said. “We obviously need female guides.” Rawandozi seemed a likely candidate. In April, she took a group of Kurdish women on a daylong hike of her own design. She wanted the practice. This summer, she will lead an all-women’s expedition to summit Iraq’s highest peak.

I spent much of November following Mohammad, McCarron and Garthwaite across the length of the Zagros in northern Iraq, and sometimes beyond. One day Mohammad took me by car from Erbil to walk through a cluster of towns and ruins 50 miles west of the trailhead. Each place was crucial to the story of religious and ethnic cohabitation he wanted the Zagros trail to tell. They included a seventh-century Chaldean monastery, the Yazidi holy temple of Lalish and, at Khinnis, 2,700-year-old bas reliefs celebrating the canal system of King Sennacherib, who destroyed the city of Babylon and has a recurring role in the Old Testament.

Yet none of these sites were part of the trail, and they probably would not be for a long time. Besides land mines, the two greatest dangers to hikers in the Kurdistan Region are airstrikes and paramilitary groups. The trail legs Mohammad and McCarron have scouted in the Nineveh Plains, which include an early prospective starting point at the hilltop city Amedi, pass by regions where Turkey has executed hundreds of air- and artillery strikes targeting P.K.K. strongholds. Strikes have also occasionally landed east of Shush, near the prospective trail route, including an attack in Bradost in August 2020 that killed 15 people, five of whom were civilians. “There are so many beautiful mountains that we just can’t go to,” one tour operator in Erbil told me. As with land mines, a deadly strike on a hiking group could set the Zagros trail back a generation.

The Red Cross says it is ‘deeply alarmed’ by conditions in Mariupol, as Russia continues to bombard.