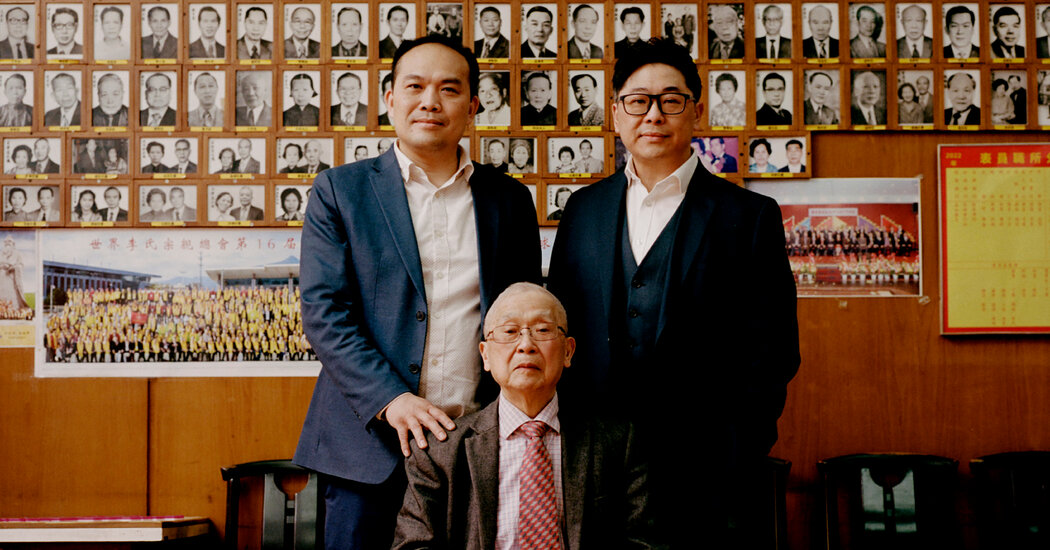 For decades, the Lee Family Association, one of the oldest civic groups in Manhattan’s Chinatown, has helped countless Chinese immigrants, working from its six-story building on Mott Street.

Its latest campaign: a makeover, starting with moving the mahjong tables.

“That’s just temporary — for the elders,” said Sonny Lee, 49, the head of the group’s newly formed youth chapter, looking past the well-worn game sets. He pointed instead to the new karaoke disco light, the billiard table and exercise bikes.

The Lees, like many traditional Chinese associations based on family, profession or region, need new blood — and the future of Chinatown, one of the few remaining working-class neighborhoods in Manhattan, could hinge on replenishing their aging ranks.

The groups’ importance is linked to their coveted real estate portfolio, amassed over decades to serve members of the Chinese diaspora, from restaurant and shop owners to longtime low-income renters.

Though demographic changes in Chinatown have thinned the clubs’ membership, they remain one of the last bulwarks against gentrification in an area of Lower Manhattan surrounded by luxury development.

The New York Times identified at least 42 buildings owned by dozens of associations — a collection of commercial walk-ups and tenement buildings that are home to scores of small businesses and hundreds of rent-stabilized tenants. In total they are worth at least $93 million, according to city estimates, but perhaps two or three times as much on the open market.

While many groups have held on to their property for decades, the pandemic has heightened challenges, with rising taxes, unpaid rent and mounting maintenance costs that could force owners to sell — and upend a delicate neighborhood balance.

“When we lose them, who takes over?” said Jan Lee, a board member of the Small Property Owners of New York, an advocacy group. “It’s not another Chinese property owner. It’s likely a corporate entity.”

Now, the clock is ticking for many groups to come up with a turnaround plan, said Fang Wong, 74, a former president of the local Wong Family Benevolent Association.

‘This area has to be next’

Unlike affluent neighborhoods like SoHo and sections of the Lower East Side, where real estate investors have helped fuel a wave of luxury developments, Chinatown has been shielded from most speculative deals. That’s partly because of longtime property owners, said Bob Knakal, the chairman of New York investment sales at JLL, a commercial real estate firm.

“A lot of owners there either don’t speak English, or pretend not to speak English, so it’s very hard to cold call property owners in Chinatown,” he said. “From a brokerage perspective, it is one of the areas that is very difficult to break into.”

Recent developments — including a nearly 850-foot-tall luxury condo tower in nearby Two Bridges, a largely lower-income neighborhood — have tested price records and renewed interest in Chinatown.

“I’ve always thought, even before Covid, that this area has to be next,” Mr. Tortorici said.

No civic association has sold property in decades, but the pressure is intensifying, said Thomas Yu, a leader at Asian Americans for Equality, a housing and social services group in Chinatown.

“Some of them are sitting on 100-year-old buildings with significant capital needs, and they just don’t have the deep pockets,” he said.

A change in ownership among the many small commercial and apartment buildings could be harmful for tenants, many of whom have worked out reduced rents with their landlords during the pandemic.

Ting’s Gift Shop, on Doyers Street, has had the same landlord since it opened more than 60 years ago: the Sun Wei Association, a club headquartered above the store whose members are from a district in Guangdong province.

The shop was forced to close for six months because of the pandemic, but the association agreed to cut its $3,000-a-month rent in half for a year while the store recovers, said Eleanor Ting, one of the owners. A building manager for Sun Wei confirmed the arrangement.

“They’re being human about it — they’re willing to work with us,” Ms. Ting said, adding that some nearby businesses have closed permanently because of inflexible landlords.

Most associations rely on rent from commercial tenants simply to cover expenses. “The buildings are not an investment, they’re for the associations,” said Eric Ng, 72, a retired accountant who also owned fortune cookie and coffee businesses and is a past president of Hoy Sun Ning Yung, one of the more prominent neighborhood groups.

For most longtime members, the properties represent the sacrifice and labor of their predecessors and, above all, a home, said Justin Yu, 76, a recent president of the Chinese Consolidated Benevolent Association, or C.C.B.A., an umbrella organization for many clubs. “They have a place to gather.’’

During the pandemic, some groups became a neighborhood lifeline. The C.C.B.A. hosted food banks and coordinated coronavirus testing and vaccinations. Several of its member groups have rallied against a rise in anti-Asian violence across New York.

Some association headquarters remain essential campaign stops for candidates, including Mayor Eric Adams when he was running for office. The groups have also been vocal in opposing new homeless shelters and the building of a local jail as part of the city’s plan to replace the troubled Rikers detention complex.

The origins of the associations

The associations began in the late 1800s, during a period of intense discrimination, to protect Chinese immigrants — mostly men who had emigrated with the goal of sending money back to family in China, said Charlie Lai, a community organizer who helped establish the Museum of Chinese in America.

Many groups were formed in the wake of laws like the Chinese Exclusion Act of 1882, which effectively banned or limited Chinese immigration until 1965.

United by shared surname, village of origin or profession, the groups functioned as de facto governments, adjudicating disputes, levying fees and deciding where businesses could open, along with lending money and helping members find jobs.

The early immigrants “were not welcome anywhere,” Mr. Lai said, and had to “create their own sense of place and create this rule of law.”

The Wong association provided that space for Mr. Wong’s family, he said: “I remember when I was very young, my father, every free moment he had, this is where he spent it.”

That spirit persists, said Amy Chin, a genealogist and the president of the board at Think!Chinatown, a nonprofit community group. “You can go there and get a meal,” she said. “Some of these family associations always have a rice cooker cooking.”

Today, the associations’ struggles are partly tied to demographic changes in Chinatown.

New York City’s Chinese population has increased 60 percent since 2000, to 570,000 from 357,000, but the growth is mostly outside Manhattan. In Chinatown, the Chinese population declined by around a third over that same period, to 34,000 from 51,000. Indeed, many association members no longer live in Chinatown.

Part of the decline is driven by high housing costs. In the first quarter of 2022, the median asking rent in Chinatown was $3,000 a month, compared with $1,950 in Flushing, a Chinese hub in Queens, according to the listing website StreetEasy.

At the same time, functions that the associations once provided are increasingly offered by Chinese-speaking social service and nonprofit organizations, which tend to be more left-leaning than the traditional groups and appeal more to younger people.

Chinese immigration has also shifted. Most of the associations are run by Taishanese speakers, while many newcomers, from regions like Fujian, speak different dialects.

And there are political divisions. Several associations still fly the flag of the Republic of China — the flag of Taiwan — because of their reverence for the statesman Sun Yat-sen, who delivered a speech in Chinatown in 1911 supporting the overthrow of the Qing dynasty. But some recent Chinese immigrants view Taiwan as a breakaway province.

Many associations are also selective about who they will admit. Family groups limit membership to people with the same surname; regional associations require family origins in a particular Chinese village or district; and most require an endorsement from a current member. Several groups still do not offer full membership to women.

But despite their aging rolls, many groups are wary of relaxing rules.

New members might question the need to hold on to properties, said Tak Wong, 76, a former president of the Lin Sing Association, which owns a walk-up apartment building on Mott Street with ground-floor souvenir shops.

“They have no passion for the property,” Mr. Wong said, repeating a common refrain among longtime association members. “They just join and wait until they have enough power, and then they vote, ‘Let’s sell it!’”

Some associations have adopted rules making it harder to sell or refinance property, including requiring approval of most of the board. (In 2010, a New York State court canceled the transfer of an association’s property as fraudulent, and association leaders have sued each other over the handling of rental agreements and payments.)

It is a slow evolution, but some groups are trying to update their practices. In 2018, Hoy Sun Ning Yung, one of the largest Taishanese groups, elected its youngest and first American-born president, Raymond Tsang, a 38-year-old funeral home director from Staten Island, who doesn’t speak Taishanese.

He has found that modernizing the group is a challenge. “We don’t even do emails,” Mr. Tsang said.

In March, he also became president of the C.C.B.A, and one of his first acts was to create a C.C.B.A. Twitter account.

Virginia Wong, a retired New York City civil servant who has long been active in Chinatown, became one of the first female members of the Wong association a few years ago. While she and others have talked about ways to draw younger members, her first assignment has been more prosaic: digitizing the musty membership lists.

Still, maintaining the support of older members is crucial. “You cannot say, ‘Oh, I want to do this or that,’” Ms. Wong said. “It takes time.”

After becoming president of the Lee Family Association in 2015, Wade Li, 40, a health care executive from Long Island, said he met resistance from older members over seemingly straightforward proposals: replacing the building’s dated elevator or expanding the pool of recipients for student grants.

“Most of my ideas were not being supported,” he said.

But Li eventually prevailed, and the group’s latest effort, a new youth chapter complete with a refurbished club room, is aimed at luring more like-minded young professionals, said Sonny Lee, 49, a chemist who will lead the new group.

The group had already created a “junior” committee. The average age: 60.

A Boston Consulting Firm Became a Power Broker, and Then a Pariah, in South Africa

Zelensky Says Blinken and Austin Will Visit Kyiv on Sunday