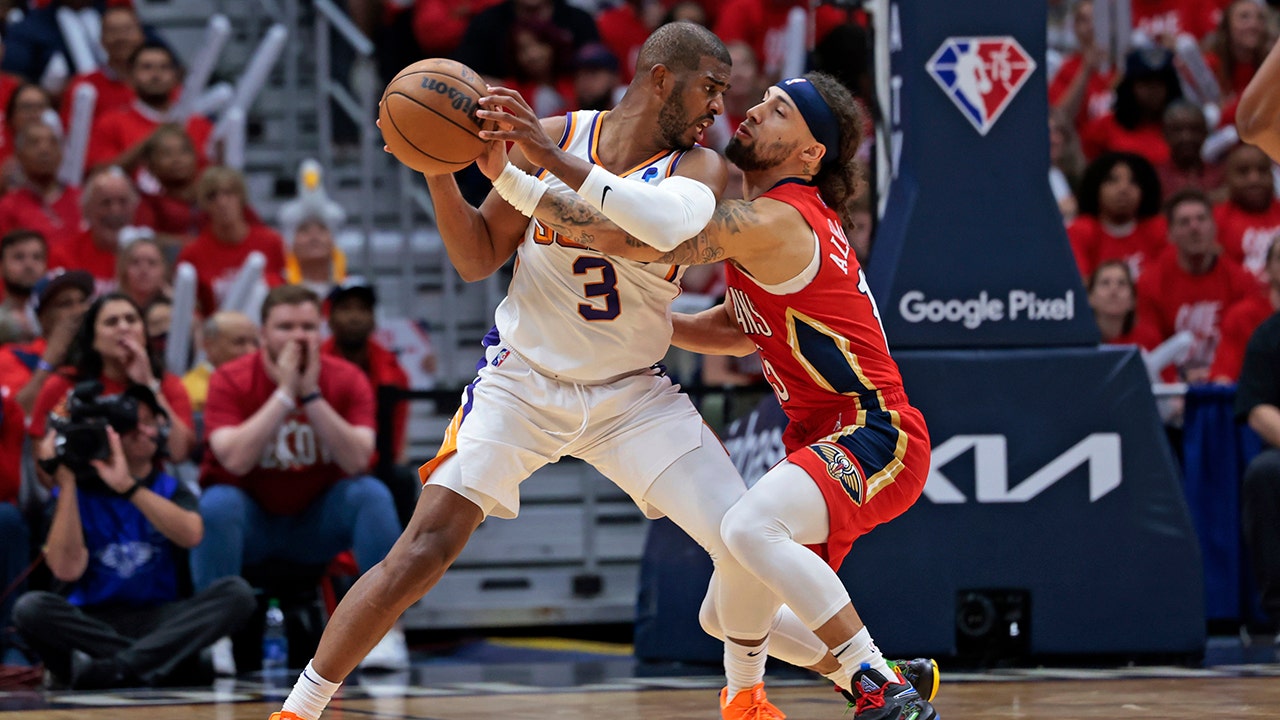 Chris Paul came through in a big way when the Phoenix Suns needed him most.

Paul scored 19 of his 28 points in the fourth quarter and the Suns overcame Devin Booker’s absence to beat the New Orleans Pelicans 114-111 on Friday night in Game 3 of the first-round series.

Deandre Ayton added 28 points and 17 rebounds to help the top-seeded Suns take a 2-1 series lead. Paul scored 15 of Phoenix’s first 23 points of the final quarter. He also had 14 assists.

“He’s just one of those players that plays the right way,” Suns coach Monty Williams said. “He understands the ‘when’ and ‘how’ to create for himself and others. The leadership qualities that you guys don’t see in the timeouts is just as impressive as what he does on the floor.”

In the first three quarters, Paul fulfilled his characteristic role as a facilitator. He had 12 assists and he had taken just eight shots, making only three.

After New Orleans took its final lead, 93-92, with 5:37 left on Jose Alvarado’s spinning layup, Paul connected on three consecutive midrange jumpers – from 14, 12 and 15 feet – as Phoenix took control, 98-93. Paul hit another lane jumper and made four free throws in the final 1:32 to ice the game.

“It’s a big win for us,” Paul said, citing Booker’s absence. “We knew it was going to be by committee. When you come into this arena, we knew it would be tough, but everybody just pitched in tonight.”

JaVale McGee, whose 7-of-8 shooting was facilitated by Paul’s passing mastery, said he continues to be amazed by the 36-year-old point guard.

“It’s amazing just seeing the concentration, the focus and just the brains he has and the vision he has,” McGee said. “He reads a play, and the defense will switch, and he’s always analyzing. He’s listening to calls that other players are calling.”

Booker strained his right hamstring Tuesday night after scoring 31 first-half points in a 125-114 home loss. He sat on the bench during Game 3.

Mikal Bridges had 17 points for the Suns. Backup center center JaVale McGee scored 15 points on 7-of-8 shooting as the Suns hurt the Pelicans inside.

“They attacked the open areas and got good looks, especially for Ayton,” Ingram said. “In the beginning of the game, CP did a good job getting to his spots.”

“It’s a long series,” New Orleans coach Willie Green said. “We’ve just got to continue to stay with it; continue to wear them down. We can’t turn the ball over. We have to make sure we get back in transition.”

Jose Alvarado kept the Pelicans in it in the fourth with seven consecutive points, but Paul answered with five straight points and an assist to tie it at 90 with 6:32 left. Paul then had eight consecutive points for a 98-93 lead.

McCollum’s 16-foot jumper with 5:13 left in the first half tied it at 43, but while the ball was in the air, Pelicans forward Jaxson Hayes barreled into Jae Crowder, who was standing on the baseline near the basket. Hayes’ shoulder-to-chest foul was reviewed and earned him a Flagrant 2 foul and an ejection.

That dustup sparked a 16-5 Phoenix run to close the half, and the Suns led 59-48 at intermission.

Ayton, who was held to just 10 points in a Game 2 loss to New Orleans, had 21 points in the half on 10-of-14 shooting, with four of his baskets coming on feeds from Paul.

Suns: Coach Monty Williams said he was thrilled the Suns held the Pelicans to just one offensive rebound in the second half. … Ayton and McGee combined on 20-of-28 shooting. … Paul had no turnovers in 40 minutes.

Pelicans: Reserve PG Devonte Graham, who has struggled offensively, had 11 first-points, including three 3-pointers. … Green said he could sense a growing momentum among Pelicans fans in what is normally considered a football city. “We’re thankful and grateful for our fans and the support that we’ve been getting,” he said. “We’re trying to put a team forward that represents the city well, and I think we’re moving in the right direction, and I think people can feel that.”

The shooting is being investigated as ‘an act of racially-motivated violent extremism,’ US attorney general says