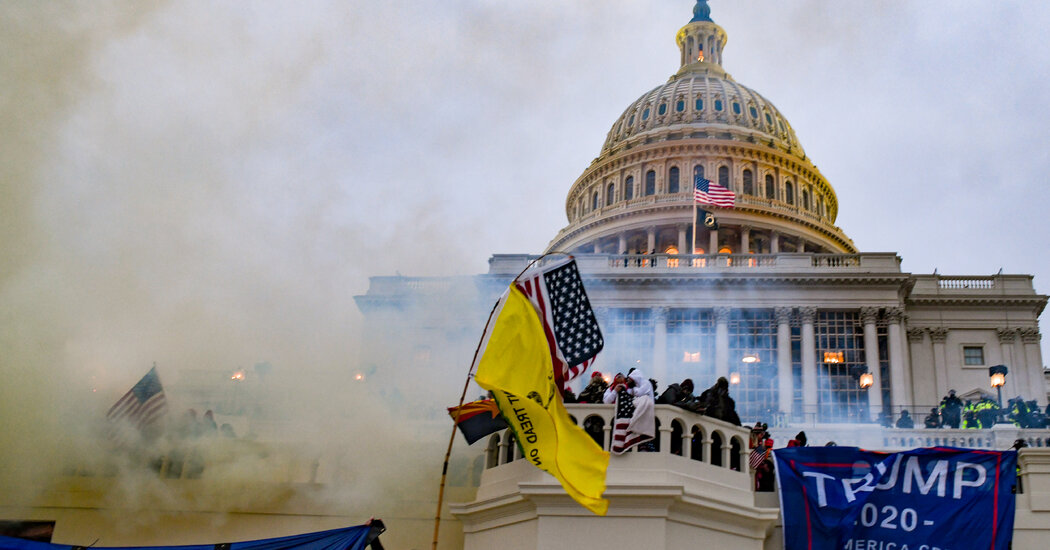 WASHINGTON — Before the Jan. 6 attack on the Capitol, Trump White House officials and members of the right-wing House Freedom Caucus strategized about a plan to direct thousands of angry marchers to the building, according to newly released testimony obtained by the House committee investigating the riot and former President Donald J. Trump’s efforts to overturn the election.

On a planning call that included Mark Meadows, the White House chief of staff; Rudolph W. Giuliani, Mr. Trump’s personal lawyer; Representative Jim Jordan, Republican of Ohio; and other Freedom Caucus members, the group discussed the idea of encouraging supporters to march to the Capitol, according to one witness’s account.

The idea was endorsed by Representative Scott Perry, Republican of Pennsylvania, who now leads the Freedom Caucus, according to testimony by Cassidy Hutchinson, an aide to Mr. Meadows, and no one on the call spoke out against the idea.

“I don’t think there’s a participant on the call that had necessarily discouraged the idea,” Ms. Hutchinson told the committee’s investigators.

The nearly two-mile march from the president’s “Stop The Steal” rally at the Ellipse to the Capitol, where parts of the crowd became a violent mob, has become a focus of both the House committee and the Justice Department as they investigate who was responsible for the violence.

Mr. Meadows and members of the Freedom Caucus, who were deeply involved in Mr. Trump’s push to overturn the 2020 election, have condemned the violence at the Capitol on Jan. 6 and defended their role in spreading the lie of a stolen election.

Ms. Hutchinson’s testimony and other materials disclosed by the committee in a 248-page court filing on Friday added new details and texture to what is publicly known about the discussions in Mr. Trump’s inner circle and among his allies in the weeks preceding the Jan. 6 assault.

The filing is part of the committee’s effort to seek the dismissal of a lawsuit brought against it by Mr. Meadows. It disclosed testimony that Mr. Meadows was told that plans to try to overturn the 2020 election using so-called alternate electors were not “legally sound” and that the events of Jan. 6 could turn violent but that he pushed forward with the rally that led to the march on the Capitol.

The filing also disclosed new details of Mr. Meadows’s involvement in attempts to pressure Brad Raffensperger, the Georgia secretary of state, over Mr. Trump’s loss there.

At rallies in Washington in November and December of 2020, Mr. Trump’s supporters did not march to the Capitol and mostly refrained from violence. But on Jan. 6, Mr. Trump encouraged a crowd of thousands to march to the building, telling them: “You’ll never take back our country with weakness. You have to show strength.” He did so after the White House’s chief of operations had told Mr. Meadows of “intel reports saying that there could potentially be violence on the 6th,” according to the filing.

Two rally organizers, Dustin Stockton and his fiancée, Jennifer L. Lawrence, have also provided the committee with evidence that they were concerned that a march to the Capitol on Jan. 6 would mean “possible danger” and that Mr. Stockton’s “urgent concerns” were escalated to Mr. Meadows, according to the committee.

In his book, “The Chief’s Chief,” Mr. Meadows said Mr. Trump “ad-libbed a line that no one had seen before” when he told the crowd to march, adding that the president “knew as well as anyone that we wouldn’t organize a trip like that on such short notice.”

She said Mr. Meadows had said “in casual conversation”: “Oh, we’re going to have this big rally. People are talking about it on social media. They’re going to go up to the Capitol.”

And, speaking about the planning call involving Mr. Meadows and Freedom Caucus members — one of a series of meetings that Ms. Hutchinson said occurred ‘frequently’ in the final weeks of the Trump administration — a committee investigator asked her whether Mr. Perry supported “the idea of sending people to the Capitol on January the 6th.”

“He did,” Ms. Hutchinson replied.

A spokesman for Mr. Perry, who has refused to speak to the committee, did not immediately respond to a request for comment.

The Justice Department and the committee both have been investigating the question of how the crowd moved from the Ellipse to the Capitol.

Committee investigators have, for instance, obtained draft copies of Mr. Trump’s speech. This month, they pressed its author, Stephen Miller, a former top White House adviser, on whether Mr. Trump’s repeated use of the word “we” had been an effort to direct his supporters to join him in moving on the Capitol to stop Congress from certifying his defeat.

Rally planners, such as the prominent “Stop the Steal” organizer Ali Alexander, also had a hand in getting people to move from the Ellipse to the Capitol. Mr. Alexander, at the request of aides to Mr. Trump, left the speech before it was over and marched near the head of a crowd that was moving toward the building.

Joining Mr. Alexander that day was Alex Jones, the founder of the conspiracy-driven media outlet Infowars, who encouraged the crowd by shouting about 1776.

On Wednesday, Mr. Jones revealed that he had recently asked the Justice Department for a deal under which he would grant a formal interview to the government about his role in the events of Jan. 6 in exchange for not being prosecuted.

Two weeks earlier, Mr. Alexander disclosed that he had received a subpoena from a federal grand jury that is seeking information on a broad swath of people — rally planners, members of Congress and White House officials — who played a role in the political events that preceded the attack on the Capitol.

Ms. Hutchinson’s testimony indicated that members of the Freedom Caucus were also involved in plans to pressure Vice President Mike Pence to throw out electoral votes from states won by Joseph R. Biden Jr. and accept false certificates claiming those states had voted for Mr. Trump.

“They felt that he had the authority to — pardon me if my phrasing isn’t correct on this, but — send votes back to the states or the electors back to the states,” Ms. Hutchinson testified, adding that they had appeared to embrace a plan promoted by the conservative lawyer John Eastman that members of both parties have likened to a blueprint for a coup.

Signs of progress. The federal investigation into the Jan. 6 attack appears to be gaining momentum. The Justice Department has brought in a well-regarded new prosecutor to help run the inquiry, while a high-profile witness — the far-right broadcaster Alex Jones — is seeking an immunity deal to provide information.

Weighing changes to the Insurrection Act. Some lawmakers on the Jan. 6 House committee have begun discussions about rewriting the Insurrection Act in response to the events that led to the Capitol riot. The law currently gives presidents the authority to deploy the military to respond to a rebellion, and some fear it could be abused by a president trying to stoke one.

Debating a criminal referral. The House panel has grown divided over whether to make a criminal referral of former President Donald J. Trump to the Justice Department, even though it has concluded that it has enough evidence to do so. The debate centers on whether a referral would backfire by politically tainting the expanding federal investigation.

Continuing election doubts. More than a year after they tried and failed to use Congress’s final count of electoral votes on Jan. 6 to overturn the election, some Trump allies are pushing bogus legal theories about “decertifying” the 2020 vote and continuing to fuel a false narrative that has resonated with Mr. Trump’s supporters.

Ms. Hutchinson suggested that White House lawyers had found the plan was not “legally sound” but that Mr. Meadows allowed it to move forward nonetheless.

The email, which Ms. Mitchell sent to Mr. Meadows on Dec. 6, 2020, contains a list of “key points” about the plan, noting, for example, that the “US Constitution gives the authority to state legislatures to appoint presidential electors.”

Ms. Mitchell had sent a version of the email one day earlier to Senator Mike Braun, Republican of Indiana, in advance of the senator appearing on television. When Ms. Mitchell forwarded the email to Mr. Meadows, she wrote, “This is what I prepared and sent to Sen Braun last night to help prepare him for ABC appearance this am. Can the WH press office get and start using??”

The filing also shows Mr. Meadows was in contact with Phil Waldron, a retired Army colonel with training in psychological operations who was among a group of plotters who pushed extreme plans to persuade Mr. Trump to use his national security apparatus to seize control of the country’s voting machines in a bid to stay in power.

Working with others like the pro-Trump lawyer Sidney Powell and Michael T. Flynn, Mr. Trump’s former national security adviser, Mr. Waldron circulated a conspiracy theory that foreign actors had hacked into voting machines made by Dominion Voting Systems in an effort to flip votes from Mr. Trump to Mr. Biden.

In a newly disclosed email sent to Mr. Meadows on Dec. 22, 2020, Mr. Waldron included a 18-page document that he described as a “National Asset Tasking request.”

The document was essentially a proposal seeking presidential approval for agencies like the F.B.I. and the National Security Agency to search their databases for people and internet addresses connected to Dominion that Mr. Waldron thought might have information on the supposed hacking scheme.

Mr. Waldron wrote that he had discussed the plan with Mr. Meadows “in your office yesterday afternoon.”