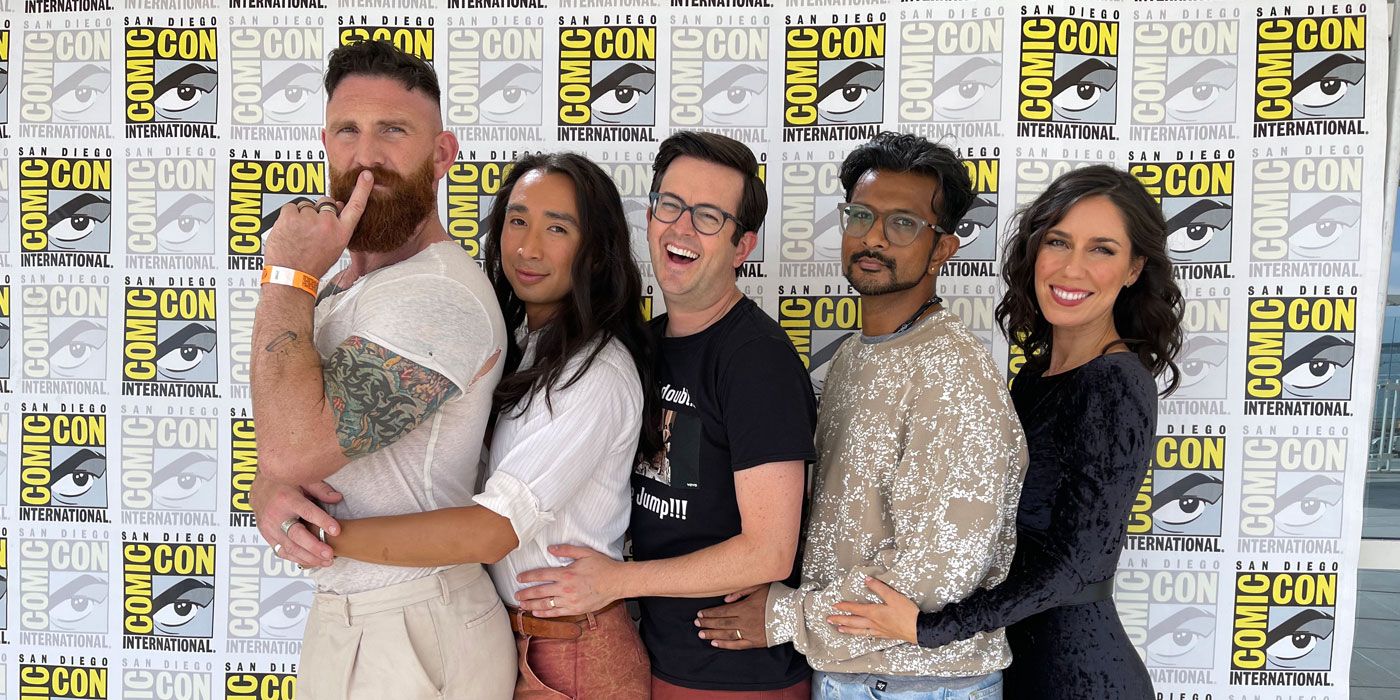 There’s a lot to love about the CBS series Ghosts, but there’s one specific thing in Season 1 that made an especially big impression — it has one of the best Jurassic Park references I’ve ever seen on screen.

In Episode 6, “Pete’s Wife,” Jay (Utkarsh Ambudkar) uses a Jurassic Park reference to explain to Sam (Rose McIver) why she shouldn’t have meddled in Pete’s (Richie Moriarty) relationship with his wife. He says, “You remember in Jurassic Park when Goldblum told everyone not to meddle, and they didn’t listen to him?” He continues, “After the dinosaurs get out and Newman gets eaten by the one that spits and Sam Jackson’s arm is like, ughh … they don’t just go home, right? They stay and they fix it.”

It’s a delightful nod to my favorite movie of all time, but it’s also not a reference made just for the sake of making a reference. It’s a very effective connection that convinces Sam not to run away from the problem she created, but rather, to be like Ellie Sattler (Laura Dern), to be the person who stays and fixes things. Even more impressive about that extensive Jurassic reference? It’s improv.

While in San Diego for Comic-Con 2022, Ambudkar and the cast of Ghosts visited the Collider interview studio, and he revealed, “That is one of the few times when I was let loose off of my leash to improvise, and it was about five minutes longer than that.” He continued, “I basically just did the whole movie and then they cut it. They use what they use. But thank you for noticing.” Thank me for noticing? Thank you, Utkarsh, for delivering one of the best in-movie/show Jurassic Park nods of all time!

After gushing about the Jurassic Park material, we did get into some specifics about other characters, like Sheila Carrasco’s Flower. While we do get some information on Flower’s past in Season 1, it does seem like there are more unanswered questions with her than the other ghosts. Here’s what Carrasco said when asked for the key to filling in the blanks while playing her until that information becomes available in future seasons:

“I feel like every episode, I as an actor am playing with what Flower’s actually paying attention to and what she’s seeing that no one else sees, all the happy colors and everything. So that has really informed how I dip in and out of scenes, my own inner life kind of.”

As much as I’m obsessed with that Jurassic Park scene, Season 1 of Ghosts does boast a slew of other unforgettable beats, including an especially sweet moment between Pete and Nancy (Betsy Sodaro) in Episode 12, “Jay’s Sister.” Nancy has the opportunity to expose Pete and tell the other ghosts their relationship was fake, but instead of doing that, she upholds the lie and even tells Pete she’s proud of him for standing up for himself and what he believes in. Here’s what Moriarty said about working on that Pete and Nancy connection with Sodaro:

“I’ll be honest, it was so easy. She’s such a gifted comedic actress, but then there are little moments like that where you’re like, ‘Oh, you have such chops.’ She’s just so good. I love that the writers took it in that direction because it’s kind of playing the long game with her where it’s not like, ‘Screw you. I’m out of here forever!’ It’s kind of like, ‘Hey, good job Petey boy. I’ll see you later,’ you know? And it’s like, okay, there’s more on the horizon for her and potentially for us. So yeah, she’s just a total joy to work with and we all love having her on set. She’s so fun to watch.”

RELATED: Rose McIver and the Cast of ‘Ghosts’ Tease What’s to Come for Sam, Isaac, Trevor, Hetty and Alberta in Season 2

When looking to the future of the series, one of the biggest burning question is, will Ambudkar’s Jay ever get to see ghosts? Given the fact that Ambudkar likely couldn’t tell us specifics on what’s to come for Jay, I opted to ask if he’d even want that to happen for the character. Does he see more creative possibilities in keeping it as is, where Sam can see the ghosts, but Jay can’t? Here’s what he said:

“I think the easy fix would be for it to be a temporary thing. Perhaps Jay falls and hits his head. I don’t know, maybe he falls through the floor in the last episode … I haven’t read the scripts so I can’t even tell you either way what happens! But I will say, it would be a joy to work with these guys as an actor. And story-wise, it may be too early to have Jay see the ghosts. We have 22 episodes, we’re in Season 2, we had such a great run in Season 1, so who knows where we’re going, but the short answer is, yes. I’d love to do it.”

While Ambudkar couldn’t confirm what lies ahead for Jay in terms of his connection with the ghosts, Moriarty, Carrasco, and Román Zaragoza were able to tease some information that’ll come into play for Pete, Sheila, and Sass in the new season. Moriarty began:

“One thing that we learn about Pete is that he was a travel agent, which is a very weird, specific about his past life, and there is more travel agent stuff in Season 2 because he now lives in a Bed & Breakfast, and he spent years booking people in hotels and Bed & Breakfasts, so we’ll see some of his knowledge come into play in Season 2.”

Carrasco added that Flower will be speaking up a bit more in Season 2:

“I think with the Ghost Writer episode about the basketball story with Pete and Flower, we got to see some of Flower’s judgy side and I’m having fun exploring more of that side in Season 2. She has more opinions that she can share.”

As for Sass, Zaragoza said he’ll get to continue tapping into his love of drama:

“I love how Sass loves drama and he loves reality shows and I think there’s definitely more there to dive into.”

Looking for more from the cast of Ghosts? Be sure to check out our full San Diego Comic-Con conversation in the video interview at the top of this article! (And for the record, I did truly close out my SDCC 2022 with a filet mignon. Thanks for the encouragement, Devan Chandler Long!)